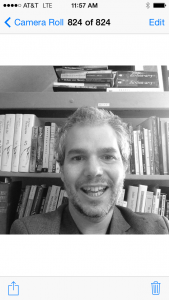 Originally from Kansas City, I attended the University of Missouri (UMKC) for undergraduate and then University of Illinois at Urbana-Champaign (UIUC)  for my graduate work. As an undergraduate I was a ranked college debater and was a member of the national champion UMKC debate squad from 1992-1994.  As my passion turned from debate to philosophy, I found my way to the Philosophy Department at UIUC where I studied Political Theory under William Schroeder, A. Belden Fields, and James D. Wallace (father of novelist David Foster Wallace).  My thesis, entitled “Political Commitment,” argued against political apathy.  My practical training in politics came from six years of organizing with the Graduate Employees’ Organization (IFT-AFT Local 6300) at UIUC, where I served variously as a member, organizer, communications director, and co-president.  I am also proud to have been part of the community movement that forced UIUC to retire its http://will.illinois.edu/chief-illiniwek-understanding-the-issues/racist mascot “the Chief.”  From 1997-2003, while a graduate student, I taught ethics at UIUC.   When I began teaching at East Stroudsburg University in 2003, I was struck by the number of first generation college students.  I found the students here eager, scrappy, and open-minded.  In response to student needs at ESU I began developing courses in law, ethics, human rights, and politics.  During those beginning years at ESU I also completed my first book, Sartre’s Ethics of Engagement (Continuum/Bloomsbury, 2006).  After 2006, the focus of my work has turned to critical race theory, African-American thought, diversity, and cultural studies.  Right now I am writing a book called Fakers: Race, Authenticity and American Expressive Cultures.  The book explores why some people, groups and works of art are considered authentic, while others are consider frauds, sellouts, posers and fakes.  In addition to my teaching and research, I am the director of the Frederick Douglass Institute for Intercultural Studies at ESU, and I am Co-director of the ESU Race Relations Program.  I also am the faculty advisor for the ESU Philosophy Club.

A couple of my academic writings:

–“Authenticity and Others” Sartre Studies International

–“Sartre after Auschwitz” The European Legacy

–“Disappointment of a Disciple” The Notes Taken 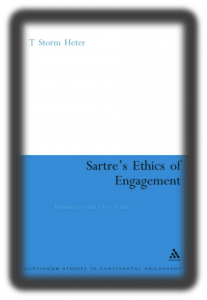