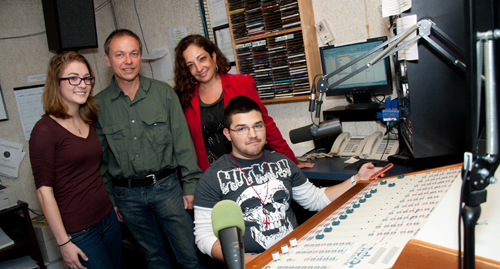 WESS-FM (90.3 FM), the student-run radio station at East Stroudsburg University of Pennsylvania, started several exciting initiatives this fall designed to enhance the quality and reach of its signal and to improve the overall listening experience of its audience.

The station recently applied for a construction permit with the Federal Communications Commission to upgrade its transmitter from 1,000 watts to 2,500 watts. Dr. Robert McKenzie, professor of communication studies and WESS’s university adviser, said the signal currently travels 10-15 miles from the transmitter, but a stronger signal would allow WESS to be heard over the air as far as the Lehigh Valley, including Easton, and in most other directions up to 35 miles away, depending on terrain. McKenzie said the FCC would respond to the permit application in six-to-eight months, with the station having three years to install the new transmitter if the permit is approved.

In July, WESS installed a new audio processor known as the “Big Sound Project,” which has upgraded the quality of the station’s music and vocal broadcasts that are now comparable to the sound of professional FM stations. Listeners to WESS now receive a fuller, heavier sound in the bass tones of the station’s broadcasts. The Student Activities Association funded the new $3,500 processor.

“The tie-in with the Sherman Theatre is a good fit because of their commitment to the arts community in Stroudsburg,” said second-year station manager Michelle Favorito, a senior from Nazareth, Pa., majoring in speech-language pathology and audiology.

The station also received a $1,000 donation from a private party for the transmitter project and received funding from the ESU Student Affairs division to offset costs associated with the FCC permit application fee.

WESS has also launched a Spanish-language newscast for the first time, which can be heard at 5 p.m. Wednesdays preceding the Latin Fiesta show. The 5-minute newscast is similar to English news briefs that precede other programs on WESS. Christina Zabih, an ESU student from Barcelona, Spain, hosts the newscast. Zabih recently completed an internship with Telemundo, the second-largest Spanish-language network in the U.S., in New York City.

Additionally, WESS is currently conducting a listener survey to help determine a clearer sense of the demographics of the station’s audience and what type of programming listeners want to hear. During their shows, WESS’s deejays are inviting listeners to take the survey online at www.esu.edu/wess. McKenzie said the goal for the fall semester is to receive 500 responses to surveys. In helping the station reach its goal, McKenzie is requiring his students who are taking CMST (Communication Studies) 337: Broadcast Management to each turn in 20 listener surveys during the current fall semester.

Receiving accurate listener data through other means is difficult, as WESS would need to purchase ratings from Arbitron. McKenzie said ESU’s location in Stroudsburg, which is situated between the Scranton and Allentown markets, means getting accurate data is not feasible.

WESS-FM (90.3 FM) is an East Stroudsburg University student-run radio station that began broadcasting in 1969. WESS can be heard on 90.3 FM in the Stroudsburg area or on the Web at www.esu.edu/wess.