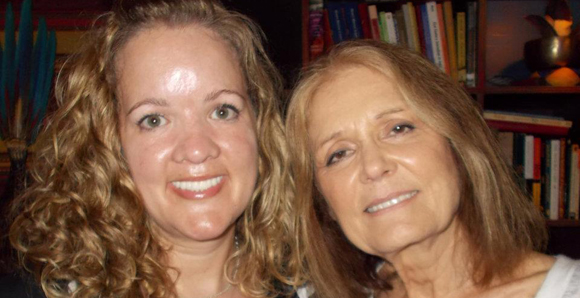 Running around New York City with two leaders of the modern feminist movement might have been the highlight of Dr. Andrea McClanahan’s participation in an inspirational summer workshop, but she can’t deny that dinner at Gloria Steinem’s home was a night to remember.

McClanahan, chair and associate professor of the communication studies department at ESU, was one of a dozen people selected to attend a weeklong Feminist Intensive Workshop in June.

“Words cannot express how the week invigorated me in my research and activism in Women’s Studies,” she said upon returning to campus and reporting that the workshop was a life-changing event.

The week was organized by Jennifer Baumgardner and Amy Richards, activists and authors of two books McClanahan uses in her courses: “Manifesta: Young Women, Feminism and the Future” and “Grassroots: A Field Guide for Feminist Activism.”

Only 12 people — faculty of women’s studies programs and staff of women’s centers — were selected to attend, giving each a chance to get close to people and organizations working on women’s rights.

“We were really able to connect and discuss issues,” said McClanahan. “I met women from across the country — some of whom I am already speaking to about collaborative research projects.”

Steinem, journalist and activist known as a leader of the national women’s liberation movement in the late 1960s and 1970s, was just one of the well-known feminists who met with workshop participants.

Among the others were Sheila Tobias, known for her focus on women in math and science; poet and author Robin Morgan, another key women’s rights activist in the 1960s; Anu Bhagwait, known for her work fighting sexual assault and harassment in the military; and Joanne Sadler, former executive director of the UN Development Fund for Women.

The workshop included a number of discussions on media issues, and meetings with the Women’s Media Center, Equality Now, National Advocates for Pregnant Women, and Women’s World Banking.

Feminism, McClanahan reports, is now experiencing its third wave. The first wave brought about women’s suffrage in 1920. The second wave — the fight for women’s rights including career and reproductive choice — ran from the 1960s through the early 1990s.

Today’s third-wave feminism is defined more broadly, with issues like race, class, age, ethnicity, sexuality, and gender all playing a role in how women define themselves, she said. But one reason people may not be aware of the current movement is that there is no single “big” issue.

But there are many obstacles remain for women, she said, especially overseas.

“If people knew what was still happening to women in other countries, they would realize that feminism is still important,” McClanahan said. “Even in our own country we have issues that are still impacting women — human trafficking is a huge issue. And reproductive rights are, once again, under attack — from the rates of unnecessary C-sections to issues like birth control and abortion.”

There is also more focus on the media, as today’s feminists work to show how perceptions of reality are shaped, and that media images can be and often are damaging, she said.

McClanahan’s research is in this area, specifically how the genders are represented in news reports and entertainment. She puts this to work teaching courses such as Gender Differences and Communication, Feminist Theory, Senior Seminar in Women’s Studies and Introduction to Women’s Studies.

Since returning from the workshop, McClanahan has been rethinking how she approaches these courses. “The day focused on global feminism made me realize that I need to spend more time in the classroom speaking about the importance of knowing what is happening globally to women,” she said.

The second day of the seminar was focused on media. “Everything I learned that day will impact my teaching, from learning new statistics to helping students view media stories a little differently.”

“I really believe having the opportunity to speak to people like Gloria Steinem and Robin Morgan — two groundbreakers during the second wave — and Richards and Baumgardner — the two individuals who are really credited with creating the primary text on third-wave feminism (“Manifesta”) — has shaped the way I look at things around me and made me realize that even if I’m discouraged at times, I can and should continue the fight.”

The experience also showed her that the famous feminists she met are normal people “who have an extraordinary commitment to fighting for what is right for women.” Steinem, she said, told the group, “Life is your textbook.”

“Feminism comes from a personal place. Sometimes it is sparked from experiencing an injustice, witnessing a debate, or, like me, reading the writing of a very strong woman who isn’t afraid to speak out,” McClanahan said. “It doesn’t matter how people come to feminism — just that people realize that the fight isn’t over yet.

“The last chapter in the textbook has not been written.”