Posted by: Elizabeth Richardson on November 22, 2019, No Comments

Using a retrofitted robot arm from the 1990s, three East Stroudsburg University computer science students won the top award in math and computer science for their robotics project at a recent conference on STEM (Science, Technology, Engineering and Math) for universities in Pennsylvania’s State System of Higher Education.

Under the guidance of Computer Science Professor Haklin Kimm, Seniors Nicholas Khouri, Melissa Schneider, Donald Punger and Kurtis Trego have been working for about a year on the project which demonstrates how older parts in robotics can be used with new ones and still work effectively. Trego was unable to attend the conference.

“Our goal was to take a very, very old robot arm and move it with a Super Nintendo controller,” said Khouri. “It was a research idea that explores how we can take legacy pieces of technology and manipulate them with new, modern technology.” 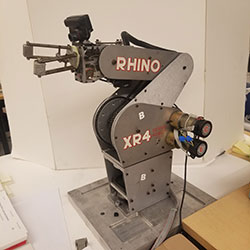 “We can create something of equal quality with a more affordable price range,” said Khouri, a native of Whitehall Township, Pa. “And we can also still expand into the realm of new modern technology in robotics.”

The students refitted the robot arm – dubbed Rhino – with a camera so it can discern its surroundings and act on them. The endeavor honed the students’ skills at building the computer hardware and creating the software to run it.

“So right now it can pick up different color balls, it can identify the colors,” said Schneider, of Dunmore, Pa. “It can also pick up, say, a Coca-Cola soda can completely by itself without being controlled by anything.”

Dr. Kimm was especially pleased at how well the students worked together to find solutions to stumbling blocks along the way.

Punger, from Greeley, Pa., said Kimm was very helpful when the students had questions and working as a team enabled each of the students to contribute their strengths.

“If someone is better at one component, like the electrical aspect, somebody is better at the programming, and someone else is better at interfacing them together, it lets you figure out what you’re good at and focus on that,” he said.

The students kept that cooperative spirit going despite the inevitable setbacks that come with invention.

“When a board would break, the computer would break, the camera would fall off or a motor stopped working, all these little things were design flaws we had to refine,” said Khouri. “Most of it came down to the software and hardware integration and having them cooperate.”

“By creating a robot that can be driven very effectively with our driver – as opposed to using its own remote control from the 90s – it expands the arm’s potential to do more modern things,” Khouri said. “So the more that we fine-tune its position and its tracking, the more advanced projects we can do with this setup.”

For example, in a line of a conveyor belt of fruit, it could pick out the rotten fruit.

“As we perfect the arm’s precision, we’ll be able to start looking at how that could be applied to medicine and engineering and all types of industries,” Khouri said.

The STEM conference, held Nov. 2 at Kutztown University where they won the top Math and Computer Science award, was a great opportunity to network and see what other students in the field are working on, Schneider said. It attracted more than 140 participants with over 70 presentations from 10 PASSHE universities, according to organizer Kutztown University mathematics professor Yun Lu.

Winning the award was gratifying, but wasn’t their main motivation, Schneider said.

“I didn’t go to the conference expecting to win anything, just to share the work we’ve been doing and talk to other students about their own research,” she said. “I was surprised and excited to see our efforts recognized, and it’s certainly motivation to continue working on the project.”