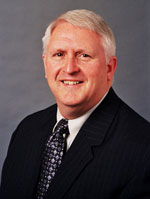 Since his arrival at ESU, Prof. Thatcher and colleagues have nurtured an accredited Athletic Training Education Profram with a national reputation for excellence. Initially approved in 1975, ESU’s program was one of the first twenty such programs in the United States.

A dynamic classroom instructor, Prof. Thatcher demands that his students embrace a professional commitment to learn and evolve. His commitment to this vision has insured the preparation of well-educated, highly qualified entry-level athletic trainers. Graduates have continued his work by serving in professional leadership roles or conducting research. Several award-winning researchers have credited their professional success to “Thatch” as their mentor and source of inspiration. He has been instrumental in the establishment of athletic training positions in many secondary schools by educating administrators and parents and advocating for the profession.

Professor Thatcher retired from ESU in 2007 and was awarded Professor Emeritus status.